A Week in Review: De-Icing, ETS Safety, and Regional Transit

This was a big week for Edmonton, with a lot of changes and transformative initiatives being set out for our city and region.

This de-icing pilot has been a controversial one with conflicting pieces of information floating around Council and the public, and it’s always a difficult situation when there’s not an entirely clear path forward.

While I was really split on the decision, 50/50 really, there are a few areas that pushed me to vote in favour of the extending the pilot:

I also heard a lot of concerns about discolouration in garages and infrastructure, however, the majority of that issue is caused by salt (sodium chloride), not calcium chloride – the calcium chloride use was limited in comparison to the salt usage last year. We have always used salt in our sand mix, and Council has pressed this issue to Administration so they can be mindful of this in the future. Of course, when we use less sand or eliminate it completely, we need to use more salt to ensure safe streets.

Calcium Chloride use is not new to Edmonton. The Province has used the brine on the Anthony Henday since it was constructed, and many Canadian cities are using the same approach we approved last week. Ultimately, I voted to extend the pilot to make the streets as safe as we can, and keep up better maintenance in our wintery city. This was a tough decision because it was hard to know which direction to go, but ultimately I believe that the continuation of this pilot was the right step forward to maintain safe roadways and narrow down the best approaches for the future.

Transit Safety
As well, last week Committee saw a new report on Transit Safety and Security. This has been a major topic for all of us, as our community has seen some deeply upsetting incidents in the last few weeks. Transit safety affects all Edmontonians, because even if the incidents aren’t happening directly in your neighbourhood, it’s impacting the whole city.

Some enhancements going into our transit vehicles and stations are retractable bus shields, camera installation, and beefing up security with more personnel, inspectors, and peace officers. Administration is also implementing ongoing employee training for experienced operators to learn de-escalation techniques, defensive driving training, and first aid. As well, we’re continuing to dig into design elements of transit centres, which was brought up in the report from a month ago as well. Focusing on lighting and security enhancements, and limiting low-visibility corridors and nooks makes for an all-around safer environment for transit riders.

A big portion of this report also focuses on how social context impacts transit safety. Administration committed to exploring partnerships with social groups and using demographic research to create solutions for specific social aspects that affect transit safety. This is encouraging to see, because crime on transit often occurs due to riders travelling cross-city with the intent to commit crime to access drugs and alcohol, which makes transit safety a deeper, systemic issue within our city. I wrote on this a while ago, which you can read here. 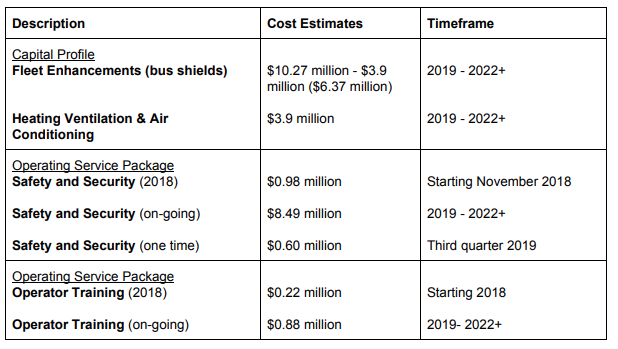 There was also a very exciting development last week. 13 municipalities in the region signed a Memorandum of Understanding to work together in pursuing regional transit. This is an amazing, massive step forward to better connect cities in Northern Alberta and will ease up on every city’s budget in the long run as we move forward together. Every Mayor signed the MOU to commit to this pursuit and I’m very excited about the positive effects it will have on every city in our region.

Building a splendid city where we can raise healthy families living in vibrant, connected communities. Father of two. Husband of one. ⚾️ & poetry make me 😃
Facebook
Twitter
Google-plus