Fire up the tow trucks. Our Snow Clearing strategy sucks!

Stopping the use of Calcium Chloride products won’t mean we have a good snow and ice strategy.

The City of Edmonton, like any other municipality, is responsible for clearing snow. In fact, many citizens believe it is our main job. It is definitely an important one. So while we’ve talked about this ad nauseum, it is our imperative as municipal government to get this one at least close to right… and soon – before Tuesday’s Council meeting. Snow is coming and right now all of City Hall has egg on our faces.

There has been a ton of coverage and conversation in the past couple of years about one method the City has chosen to use to help clear snow and ice. This is the use of salts; sodium chloride (NaCl) and calcium chloride (CaCl), both used in the past as part of a sand mix but recently used more aggressively.

We significantly reduced the use of sand because it makes the city look dirty, it’s expensive to pick up, very difficult to recycle and reuse and it arguably didn’t make our roads very safe in the winter.

So our Administration shifted to a strategy they felt was better to keep up with snow and ice and to more effectively deal with changing weather patterns defined by way more ice in the winter than Edmontonians are used to. That strategy is described in this picture below. This is a strategy used by most cities in North America.

But the truth is that our increased use of CaCl and NaCl was doomed from the start because we didn’t have a sufficient communications strategy to accompany the rollout. What is the difference between CaCl and Road Guard brine? It’s a basic question, but yet unanswered for most Edmontonians. We blew it.

Media reports, some ok, some loose with the facts began to emerge about the potential dangers of CaCl so, long story short, I spent a lot of time in the last two years writing emails to and visiting constituents who were worried about their cars and garage floors.

It is a fact that salt in any form can be corrosive to metal and concrete and can be damaging to the environment. It is also a fact that CaCl in brine form is a product that includes corrosion inhibitors. The media seems to love the beet juice strategy Calgary uses but beet juice is simply a corrosion inhibitor for CaCl. It is also true that NaCl or rock salt is more corrosive in its pure form than inhibited CaCl.

Let me get right to my point.

As of today, we do not have a satisfactory snow and ice strategy.

We’ve spent two years obsessing about whether CaCl is the work of the devil and Council has remained divided. It doesn’t matter that pretty much every other community in Alberta uses this product (I asked most of them at our Alberta Urban Municipalities Conference last week). And it doesn’t matter how much technical research our Administration provides to defend their use of the product. Council is divided and the public is fearful at worst and skeptical at best.

Two Councillors this week thoughtfully tried to scale back the approach taken in the pilot project. And I disagreed with them both. Here is why.

One motion significantly reduced the use of all salts and moved us back to the old approach before the pilot shown in the image above. There was no plan B articulated. Administration provided high-level costs that contemplated a $37 million dollar price tag to hire more contractors to use more plows. This motion didn’t lead to an effective snow and ice strategy.

Another motion simply eliminates the use of CaCl for a year but allows the continued use of NaCl, which unlike CaCl has no corrosion inhibitors. This is the worst kind of salt. So more of the more corrosive salt, (the likely culprit for damaged garages, lawns etc.) and probably more plows – likely requiring us to dip into our financial reserves AND a strong possibility our roads would be less safe. And then we’ll have the same discussion all over again next year. 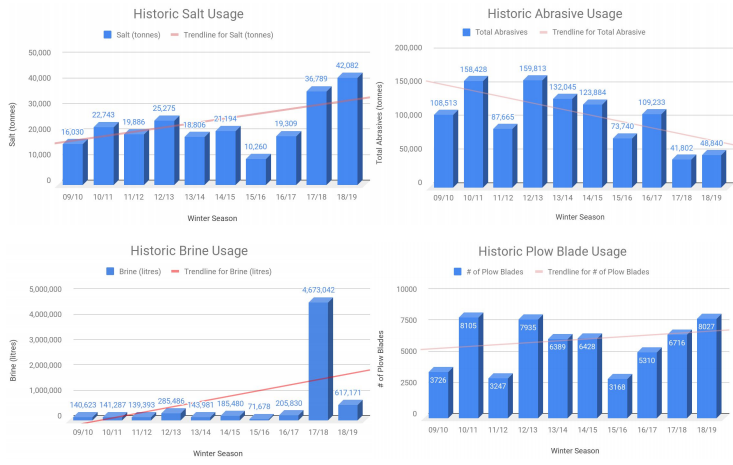 But their disposition going forward was only to use either when necessary to keep up with changing weather, larger snow events and freezing rain- to ensure the safety of our streets in the winter. I think this is the best approach that needs to be coupled with more commitment to constant engagement with developers and builders concerned about their infrastructure and with a citizens panel of everyday Edmontonians who can ask us tough questions and help us educate their peers with facts. And we review this yearly.

But this is not where most of Council is. We are divided. We are frustrated with Administration. I am frustrated with the media for being more interested in controversy than facts. And it is the public, our citizens who will pay the price, either through fear for their personal property or through a snow and ice strategy that, well, sucks!

So while I say we have failed collectively in achieving our most basic responsibility (clearing snow and ice effectively), we have a good Council and very talented people in our Administration who can figure this out. But this is where the real problem lays.

Council and our City Manager and her team of Deputy City Managers never get in a room and talk. We only talk together in the theatre of Council Chambers with the media recording every word. This is not how any other order of Government or big corporation solves difficult problems. Yeah I’m all for transparency and municipalities need no lectures from anyone about openness considering that we basically do everything in public, but sometimes when things get tricky, leaders – elected and administrative – need to huddle and figure things out. Some people may be offended but way more people just care about good public service.

We vote on this again at next Tuesday’s council meeting and hopefully we can come up with a better approach before then. It’s time for us to get it together.

Building a splendid city where we can raise healthy families living in vibrant, connected communities. Father of two. Husband of one. ⚾️ & poetry make me 😃
Facebook Twitter Google-plus